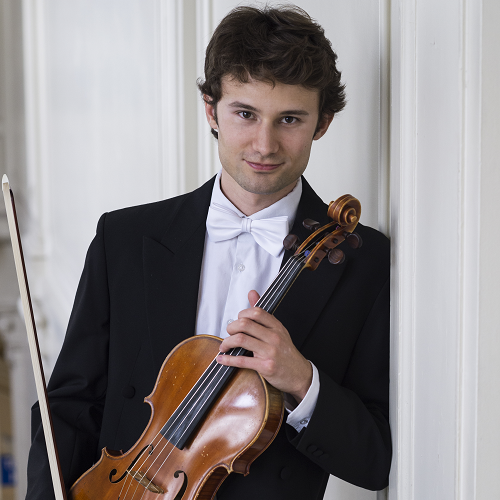 Joachim Angster has performed across Europe, Asia, and the United States as a soloist, and as a chamber and orchestral musician. He was a prizewinner, finalist and semi-finalist in major international competitions, including the 2018 Washington International Competition for Strings in Washington DC, the 2018 Anton Rubinstein International Viola Competition in Düsseldorf (Germany), the 2016 Illzach International Chamber Music Competition (France), the 2010 Concours de Cordes d’Epernay (France), and the French National Viola Competition in 2009 and 2010. In 2010, Joachim received the Pfimlin Prize from the city of Strasbourg, France, rewarding his artistic achievements. Joachim joined the Tonhalle Orchestra of Zürich during the 2015-2016 season, where he worked with renowned conductors such as C. Dutoit, B. Haitink, D. Zinman, H. Blomstedt, and Sir N. Marriner. While in Switzerland, Joachim served as principal violist of the Camerata Valais, led by the concertmaster of La Scala of Milan, F. De Angelis. Joachim also performed with the Orchestre de Normandie in France on multiple occasions, and is currently a member of the Ann Arbor Symphony Orchestra, and of the Lansing Symphony Orchestra in Michigan.

Passionate about chamber music, Joachim was a founding member of the Valère String Quartet, with whom he performed extensively in concerts and festivals in Europe and the U.S.A, and recorded on multiple occasions for the Swiss National Radio. He is also a member of the Duo Florent, which he formed with violinist Arianna Dotto, and his ongoing dedication to new music led him to join the Four Corner Ensemble, with whom he has performed extensively in China (Shanghai) and the US (Carnegie Hall and other venues in NYC, Connecticut, and Michigan). A native of Strasbourg, Joachim began his studies in France (Strasbourg and Paris) and obtained a Master’s degree from the Lausanne Haute Ecole de Musique in Switzerland before continuing his education in the US (Cleveland). His teachers included P. Xuereb, T. Adamopoulos, and G. Karni, with additional education received in international master-classes at the Verbier Academy, the Pablo Casals Festival, and the Sion Festival, working with such renowned musicians as A. Arad, G. Knox, P. Coletti, G. Takacs-Nagy, J. Puschhammer, J. Sulem, B. Pasquier, and the Juilliard, Talich, Takacs, and Zehetmair Quartets. Joachim is currently pursuing his Doctorate in Viola Performance at the University of Michigan, under the mentorship of Caroline Coade and Yizhak Schotten.