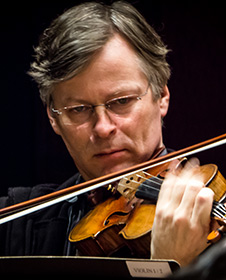 Second Assistant Concertmaster Simon James has been a member of the Seattle Symphony since 1988; he is also a member of the Australian World Orchestra and was recently guest concertmaster with the Western Australia Symphony Orchestra. In addition to performing concerti with and acting as concertmaster of the Seattle Symphony on several occasions, James has led the Orchestra in Seattle Opera productions of The Ring, Der Rosenkavalier, La Bohème and The Flying Dutchman, among others. James is an active teacher with students who have won international competitions and gained entrance to the nationʼs most prestigious music schools, including The Juilliard School, the Curtis and Colburn schools of music, and New England Conservatory. He is a graduate of the Manhattan School of Music, where his teachers included Erick Friedman and Syzmon Goldberg.