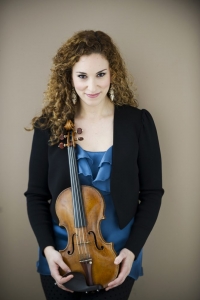 Since her solo orchestral debut at age 15, Ilana Setapen has been flourishing as a violinist with a powerful and original voice. She is hailed by the Milwaukee Journal Sentinel as a violinist with “a sparkling sound” and “the kind of control that puts an audience completely at ease.” She is currently the Associate Concertmaster of the Milwaukee Symphony Orchestra.
In recent seasons Setapen has had solo performances with the Milwaukee Symphony, Festival City Symphony, the Boca Raton Symphonia, and the Amarillo Symphony, among others. She held the Assistant Concertmaster position of the Grant Park Music Festival Orchestra in Chicago for 6 years. She is also a favorite guest
concertmaster with the Chicago Philharmonic. In recent summers she has made guest appearances at the Olympic Music Festival on Bainbridge Island, and she spent two summers on the faculty of the Luzerne Music Center summer festival in Lake Luzerne, New York. This summer she will be on the faculty of Center Stage Strings in Ann Arbor, Michigan.
Also a committed chamber musician, Setapen is in demand as a collaborator throughout the midwest. She is a frequent guest on the Frankly Music Series. She performs as the violin duo Bowing Rogue with her colleague Margot Schwartz. In 2018 she helped start the successful Advanced Chamber Music Institute at the Wisconsin Conservatory, in which she gives weekly coachings and masterclasses to aspiring young musicians. Solo and chamber music performances have brought her abroad to China, France, Brazil, Holland, England, Monaco, and Italy. She holds a BM from the University of Southern California and a MM from the Juilliard School.