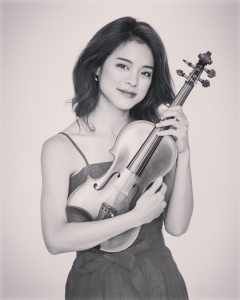 Violinist Christine Harada Li is a highly active and versatile artist who has performed across the U.S.A., Canada, Japan, Germany, Italy, Austria, Spain, and Israel. As a soloist Christine recently performed Benjamin Britten Concerto with the University of Michigan Symphony Orchestra, and will perform with the Bruch Violin Concerto with the Marquette Symphony Orchestra and the Anchorage Youth Symphony next season. She frequently performs with the award-winning Koinonia Trio, which has been playing together since 2015. Passionate about chamber music, Christine has collaborated with many internationally acclaimed artists, including David Halen, Yehonatan Berick, Gilles Apap, Guy Braunstein, Amihai Grosz, Ayano Ninomiya, members of the Berlin Philharmonic, and others. As an orchestral musician, Christine has had the opportunity to play with the St. Louis Symphony Orchestra, the CityMusic Cleveland Chamber Orchestra, and Ann Arbor Symphony. She has performed (both violin and viola) as a guest artist at the Maui Classical Music Festival, Oberlin Acoustics Workshop and the Ann Arbor Chamber Fest.

In addition to performing, Christine takes leadership in various art organizations and serves as Artistic Director and founder of the Anchorage Chamber Music Festival, Education Director at the Innsbrook Institute Summer Festival and Academy, and Vice President of the Anchorage Fine Arts Society.

Christine grew up in a musical family and began studying violin at the age of five and piano at the age of ten. Her childhood principal teachers were Beverly Beheim for violin and Rumi Smith for piano. Christine made her international debut when she was 10 years old at the Talent Education Research Institute’s Suzuki Summer School in Matsumoto, Japan.